Commercial HVAC systems are expensive, and you want yours to last as long as possible. Like any other equipment, however, the parts wear out over time and eventually must be replaced. That can put a strain on your budget, so whenever possible you’d probably prefer to refurbish a part rather than replace it. Air conditioner drain pan repair, for instance, is one way you as a building owner or manager can save considerable money. What’s more, in these environmentally-conscious times, it’s almost always better to refurbish than throw away.

Following is an explanation of how corrosion undermines drain pans, and why refurbishment of the pan might be the best course of action for you.

Condensation and Corrosion in Drain Pans

Air conditioners work by moving warm air over an evaporator coil containing refrigerant. During this process, water vapor in the air condenses into droplets, which are collected in the condensate pan and then drain away. This is the basic mode of operation for air conditioners, be it a residential window unit or a commercial system.

The larger the air conditioner, the greater the amount of condensation entering the pan and flowing down the drain. Over time, condensate drain pans that aren’t well maintained may begin to rust; slime and even bacteria can start to build up so that they eventually clog the drain, causing it to overflow. The condensate drain pan should be kept clean and in good working order, not only for the health and safety of the building’s occupants, but also for the proper operation of the HVAC system and to avoid damage to the building.

Drain pans in a commercial air conditioner get a heavy workout, and may under water almost continuously. Corrosion of the surface is likely over time. Among the problems that corrosion can cause are:

There are ways to avoid the expense of replacing the drain pan by extending the life of the one you have. But just scraping the pan with a wire brush and painting the surface with rust-resistant paint won’t work. Because the condensate pans of larger commercial air handling units are usually filled with water, coatings that aren’t specifically designed for submersion will tend to peel and flake, and conditions will be worse than prior to the application. 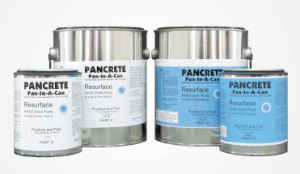 Contact SANAIR Indoor Air Quality, serving the Newport News area since 1994, for cleaning complete HVAC systems for your home or business. SANAIR has a team of trained and certified professional technicians who use only EPA approved products for cleaning air ducts and your entire system.